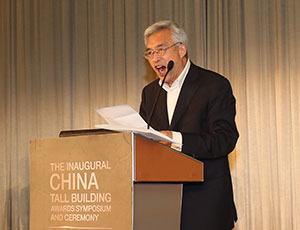 Senior representatives of each of the Excellence Awardees gave presentations at the Awards Symposium at Shanghai Tower, with the jury convening immediately afterwards to determine an overall winner. Jury Chair Chunhua Song, former vice minister of the Chinese Ministry of Housing and Urban-Rural Development, then had the honor of awarding the title of overall “China Best Tall Building” to Bund SOHO at an elegant Ceremony & Dinner held in the 5th-floor Garden Ballroom of the recently completed Shanghai Tower.

China Awards Jury Chair Song characterized the process of selecting the inaugural Best Tall Building winner, “The decision was unanimous, but carefully considered. The consensus was that Bund SOHO adapted well to a challenging site, demonstrated a respect for local history, and was well-detailed, using warm-colored materials that coincided with the community.“ 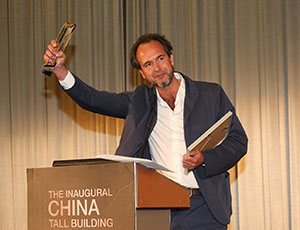 The Awards Jury commented, “Bund SOHO resolves a difficult site, historic surroundings, the requirements of the modern office building, and the responsibility of a high-profile waterfront location in Shanghai with a reserved distinction. It is like a ship’s prow, pushing the frontier forward of the established central Bund into new, uncharted territories, with visible confidence. There are discernible shades of Raymond Hood’s work at Rockefeller Center, New York and nods to the Art-Deco predecessors on the Bund, as well as to the existing grain of the neighborhood. Nevertheless, a project of unique qualities has been rendered here.”

Stephan Rewolle, Associate Partner, von Gerkan, Marg and Partners Architects, accepting the award for Bund SOHO, said, “I want to congratulate the organizers for this very professional and very great event. Secondly I want to thank our clients SOHO China for making this possible. You have been a really great client and it’s been inspiring work. I want to thank ECADI as being a good partner. And of course I want to thank my team in Beijing, I think you did a really good job.” 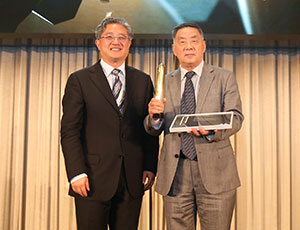 The awards not only recognize projects. Of course, there would be no projects without the efforts of extremely talented and hard-working people. The inaugural China Tall Building Outstanding Achievement award went to Dasui Wang, Chief Engineer of ECADI and China Design Master.

Based on the successful CTBUH worldwide tall buildings awards program, the CITAB-CTBUH China Tall Buildings Awards Program is a joint initiative of CTBUH and the China International Exchange Committee for Tall Buildings (CITAB), established in April 2015.

Each group appoints an equal number of members to the jury, which will judge projects submitted through the process described below. The culmination of the process is an Awards Ceremony and Dinner where the awards are bestowed, preceded by an afternoon Symposium, in which the year’s award recipients and a select number of Honorable Distinction recipients present their projects.

The CITAB-CTBUH China Tall Buildings Awards recognize projects and individuals that have made extraordinary contributions to the advancement of Chinese tall buildings and the urban environment, and that achieve sustainability at the highest and broadest level. Tall buildings can be polarizing presences in their cities, admired for their sheer height or skyline silhouettes, and criticized for their poor environmental performance and street-level experience. The object of this awards program is to provide a more comprehensive and sophisticated view of these important structures, while advocating for improvements in every aspect of performance, including those that have the most effect on the people who use these buildings each day. This often means that the buildings highlighted are often not the tallest in a given year, but represent the best qualities and innovations in the typology.